Unprecedented rains in 2022 raised hopes for the drought-devastated Hamun Oasis, or Hamun wetlands, on the Afghanistan-Iran border, but political conflicts threaten to dash them. Recent maps uploaded to Soar.Earth shed new light on the situation.
‍
The history
‍
The Hamun Oasis is a seasonal lake in the Sistan Basin, surrounded by high mountain peaks. It’s made up of a series of small interconnected lakes which together create the largest freshwater lake in Iran. The region has been inhabited for almost 1,500 years, with local communities and wildlife relying on this vital water source. 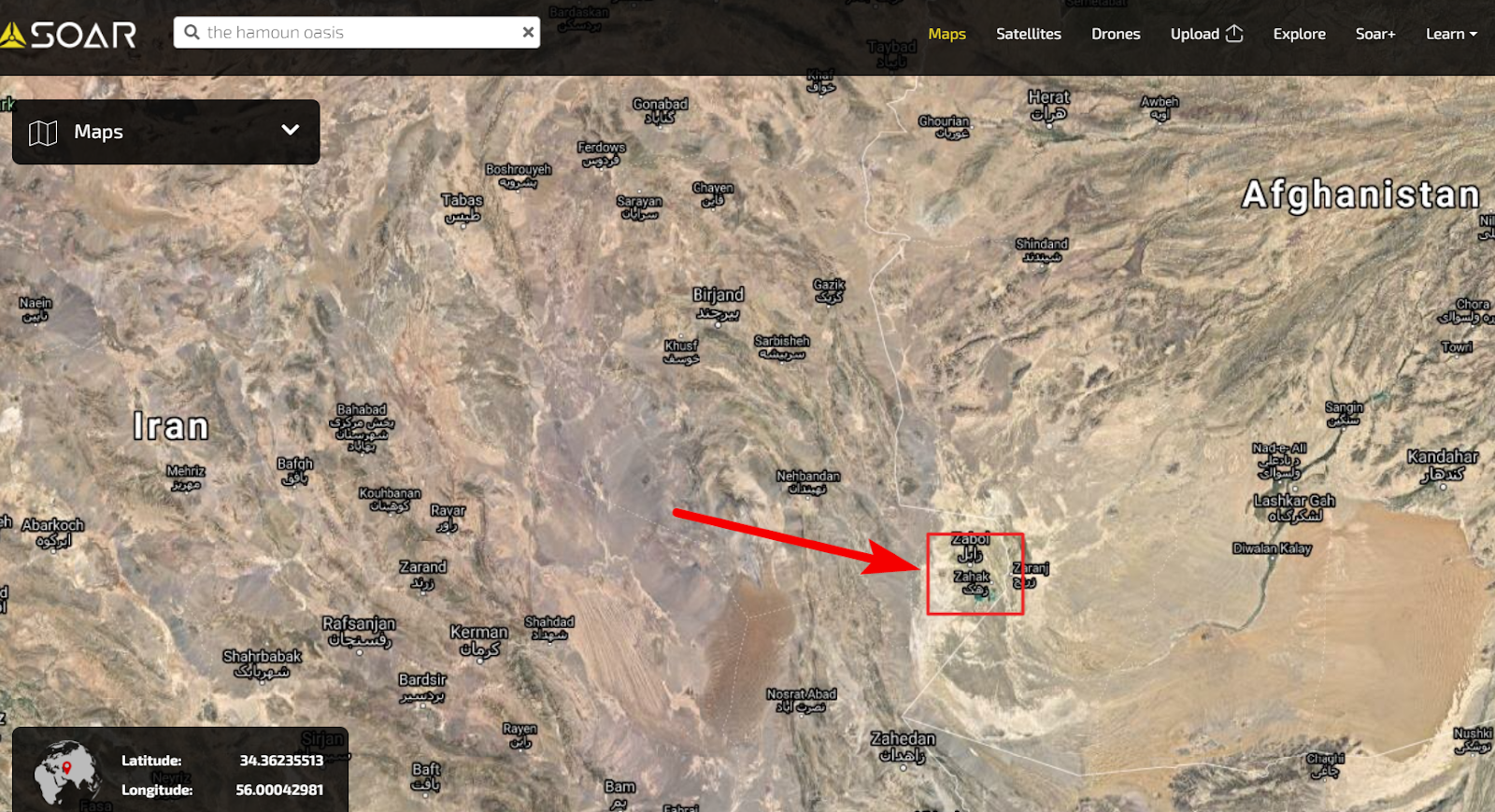 The location of the Hamoun Oasis on the border of Iran and Afghanistan (Source: Soar.Earth) 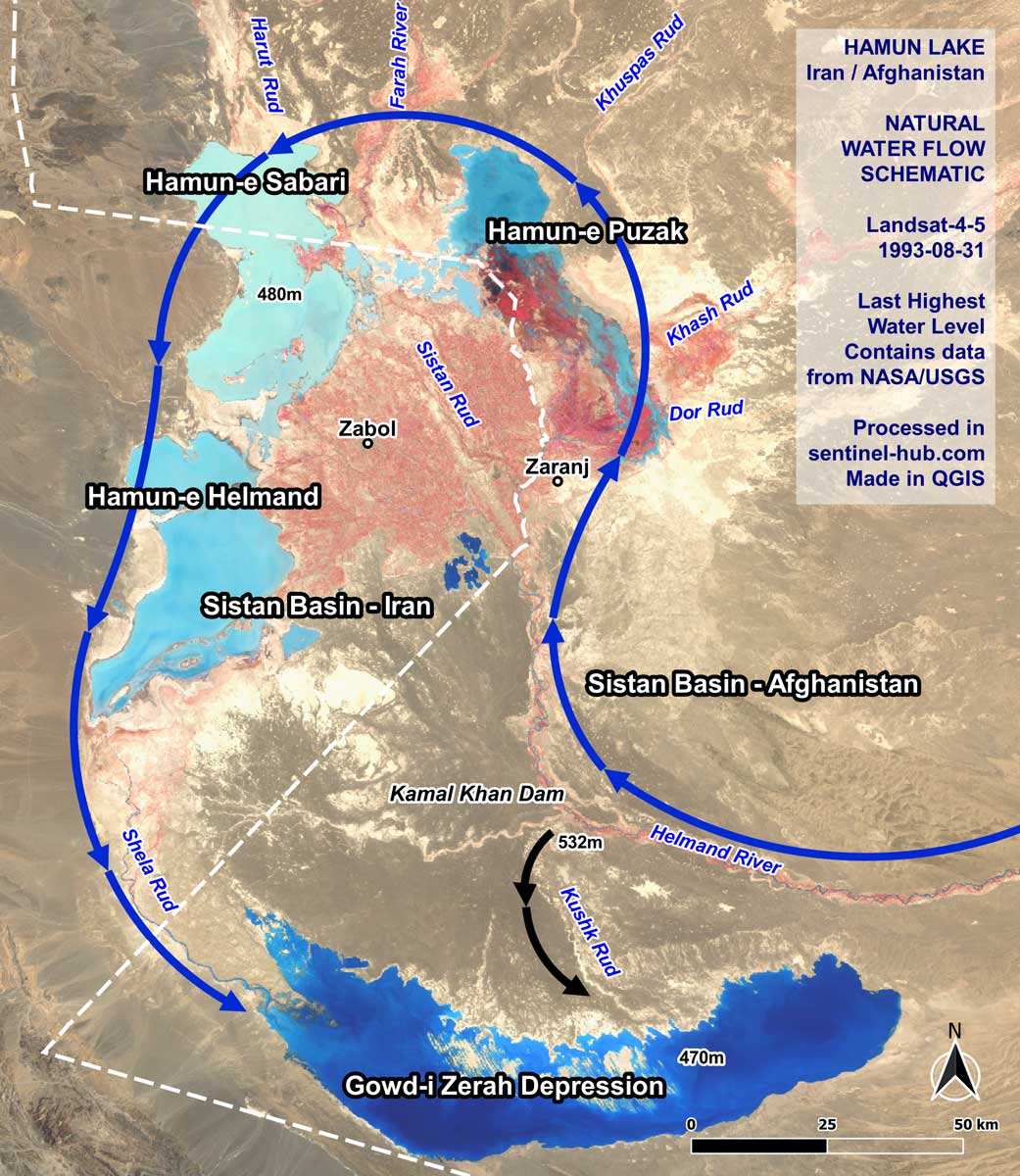 The natural flow of the wetlands can be seen in this Soar.Earth image from the last time the lake was full in 1993. The image shows the natural circular flow of water, starting from Helmand River, which connects all the hamuns (a local word for wetlands) into one great lake when filled, and finally discharging into Gowd-i Zerah depression. In times of intense flood, this cycle could be naturally shortcut through Sistan Rud, which sends water directly to Hamun-e Helmand, while water continues to flow in from northern sources such as Harut Rud, Farah River, and Khupas Rud.

Sadly, long, severe droughts from 1999, coupled with political turmoil and overuse of water for farming, saw the region dry up, displacing many people who were forced to abandon the area in search of water. Short-term bursts of rainfall have offered partial, temporary replenishment throughout the years, but the ongoing drought, political factors, and the building of dams left the area mostly arid for the past 20 years. Wildlife, towns, and farmers who relied on this water source have suffered as the area has experienced significant desertification.

A glimmer of hope
‍
Recent rainfall raised hopes of replenishment across the wetlands. However, most of the replenishment occurred at the northern part of Hamun lake, in Hamun-e Sabari and Hamun-e Puzak, as we can see in this Soar.Earth map. These lakes receive water from the northern mountains through the waterways Farah Rud and Harut Rud. But other areas of the wetland, such as the areas around Zabol and Sistan Rud, have remained dry, as water has been diverted.

The southern areas of the Sistan Basin have also suffered, as much of the water was diverted and is being retained by the Kajaki Dam, the recently-completed Kamal Khan Dam, and other smaller water diversion structures. You can see from this map in Soar.Earth (also see below) how the water is currently distributed across the Hamun Lake region. The red dots indicate man-made water barriers - which are preventing a wider recovery of the wetlands. 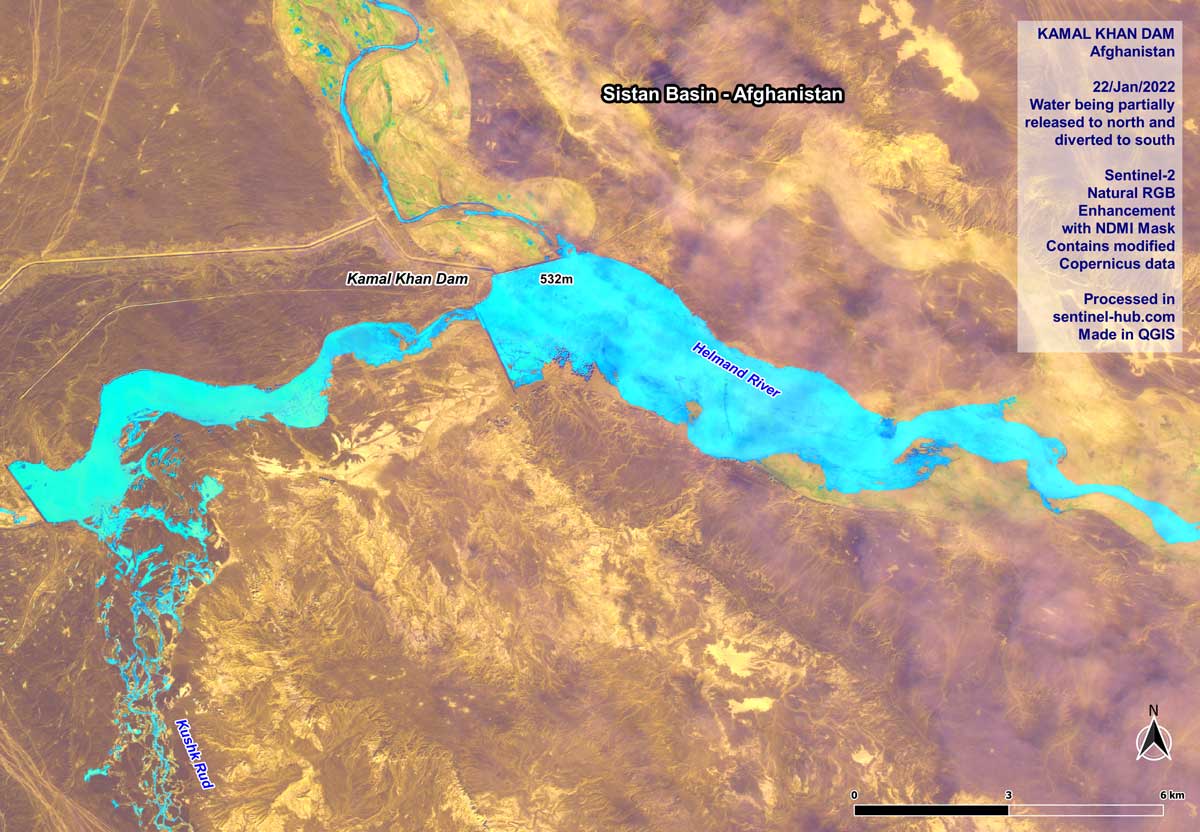 The present situation
‍
Before Afghanistan’s Kamal Khan Dam was completed in 2021, smaller water diversions were already reducing flow, leading to less water reaching Iran’s border. Now the Kamal Khan Dam is operating, even more water is being retained on the Afghan’s side, preventing the wetland from being replenished.

For the first time since it’s completion, the Kamal Khan Dam has filled to its limit thanks to the recent rain and snow across the greater Sistan drainage basin. The Taliban opened the floodgates, which ideally would have released water to reach and help Iran. View a video of this here.
However, this map and this map uploaded to Soar.Earth show little indication the waters have reached much further than Afghan farmland areas near the dam. Minimal water appears to be released to its natural course north. It appears much of it was diverted into Gowd-i depression, which holds no farming, meaning this precious water has been wasted, rather than being distributed to both the people who need it further downstream, and the greater Hamun wetland system.

These developments are concerning as a recent report by the Iranian Parliament's Research Centre indicated one fifth of Iranian cities are facing water shortages. Additionally, the dried out lakes are contributing to intense dust storms. Persistent strong winds occur during the summer, picking up dust and creating dust storms. If it’s humid and there is water in lakes, the winds can’t pick up the sediments, which become thicker, heavier mud and don’t turn as easily into blowing dust. The drier the lakes are, the more loose dust there is to be picked up by the wind, creating large dust storms which reduce air quality and cause adverse health impacts for locals. 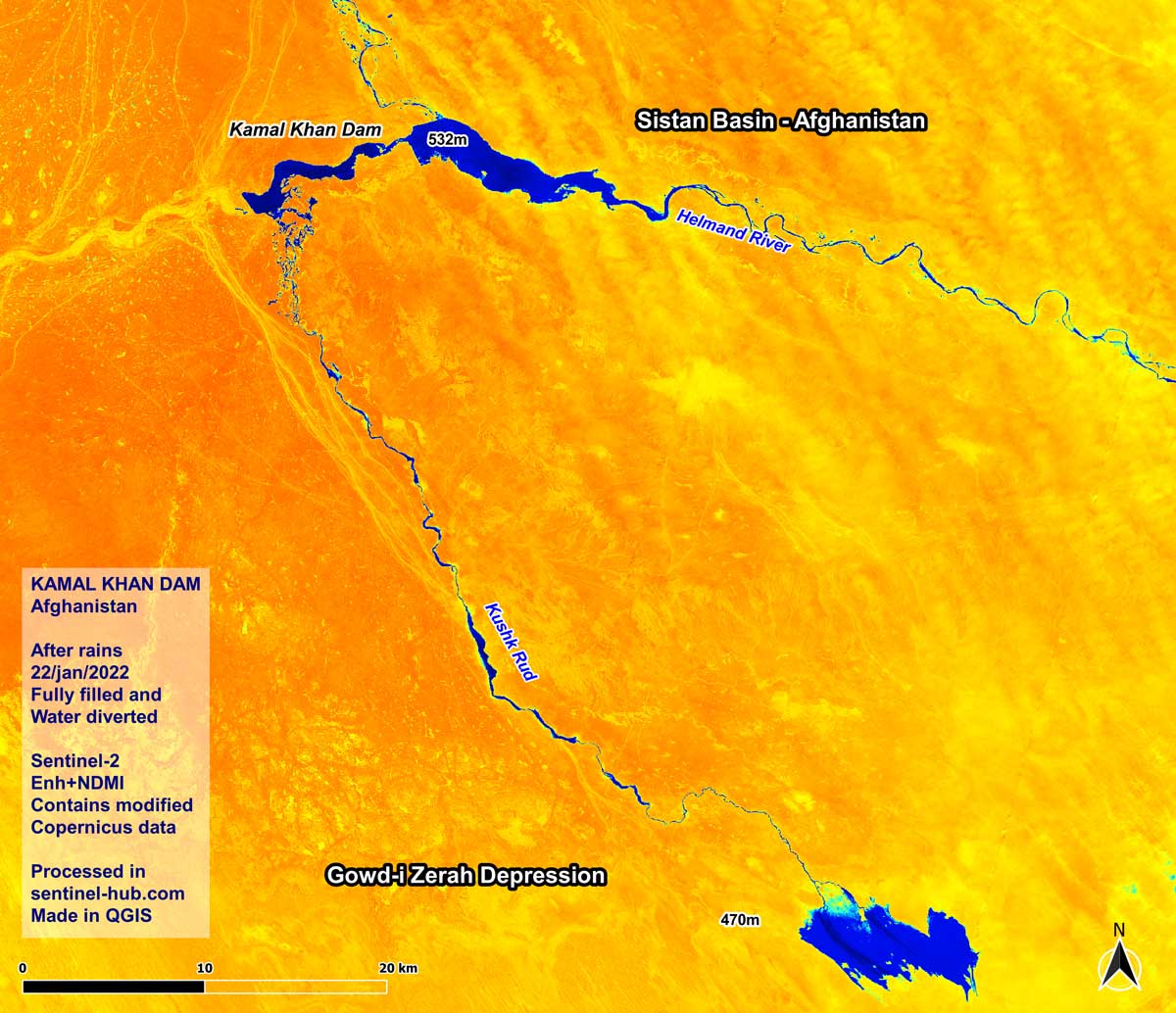 In conclusion
‍
It’s necessary for people to take water from the lake and the rivers that feed into it, for farming and drinking water. However, these maps show that man-made structures, as well as the critical influence of politics, are disrupting the natural flow of the Hamun Lake area and exacerbating further water shortages. Water is a powerful commodity and potentially a political weapon: as long as there is political unrest, these issues will continue to devastate the ecosystem and the people and animals who rely on the water for survival. These maps underscore the need for stronger cross border planning and management to ensure a responsible distribution of water.
explore soar.earth imagery
back to press page