Why people are observing the Space Industry using Satellite Imagery

There’s been a recent rise in people sharing maps and satellite imagery of space sites online, why is that? Often public access to these sites can be limited, which can make it hard to have a good understanding of what’s happening. With the global space industry predicted to generate more than $1 trillion in revenue by 2040 we are going to see a lot of growth when it comes to infrastructure such as; factories for satellite and rocket production, launch sites to support more frequent flights and all of the supporting ground assets needed for these.
Locations such as; Kennedy Space Center & Cape Canaveral Space Force Station, Vandenberg Space Force Base as well as launch sites in China, Russia, and many other countries have limited access to the public due to the nature of their operations. However, satellite imagery can make these locations far more accessible. It’s never been easier or cheaper for the public to access high-resolution satellite imagery, normally locked away from the public.

A great example of this is a launch complex recently constructed at China’s Jiuquan Satellite Launch Center. Due to the very limited information coming out of China, satellite imagery from Sentinel-2 gave us the best view of the work happening there. From this imagery, we could see the northwest end of the complex, which housed offices and a large hangar. We also saw the southeast end which consisted of a launch pad, as they came to life.

Just south of this launch complex is a site believed to be used for solid rocket motor testing. In October 2021, it appeared that there was an explosion on this test stand, causing extensive damage to the facility. This explosion wasn’t reported until evidence was discovered in satellite imagery nearly 8 months later.
‍
Using Sentinel-2 imagery from Soar.Earth we can see the explosion occurred between October 10 and 17. The first high-resolution image was taken on November 18.

Just south of this launch complex is a site believed to be used for solid rocket motor testing. In October 2021, it appeared that there was an explosion on this test stand, causing extensive damage to the facility. This explosion wasn’t reported until evidence was discovered in satellite imagery nearly 8 months later.
Using Sentinel-2 imagery from Soar.Earth we can see the explosion occurred between October 10 and 17. The first high-resolution image was taken on November 18.

Further monitoring of the site through to June 2022 shows the effort to clean up the debris spread by the explosion.

Comparing the two below, you can see why people in the space community might use satellite imagery to observe these locations. It acts as a useful tool to monitor and document history. 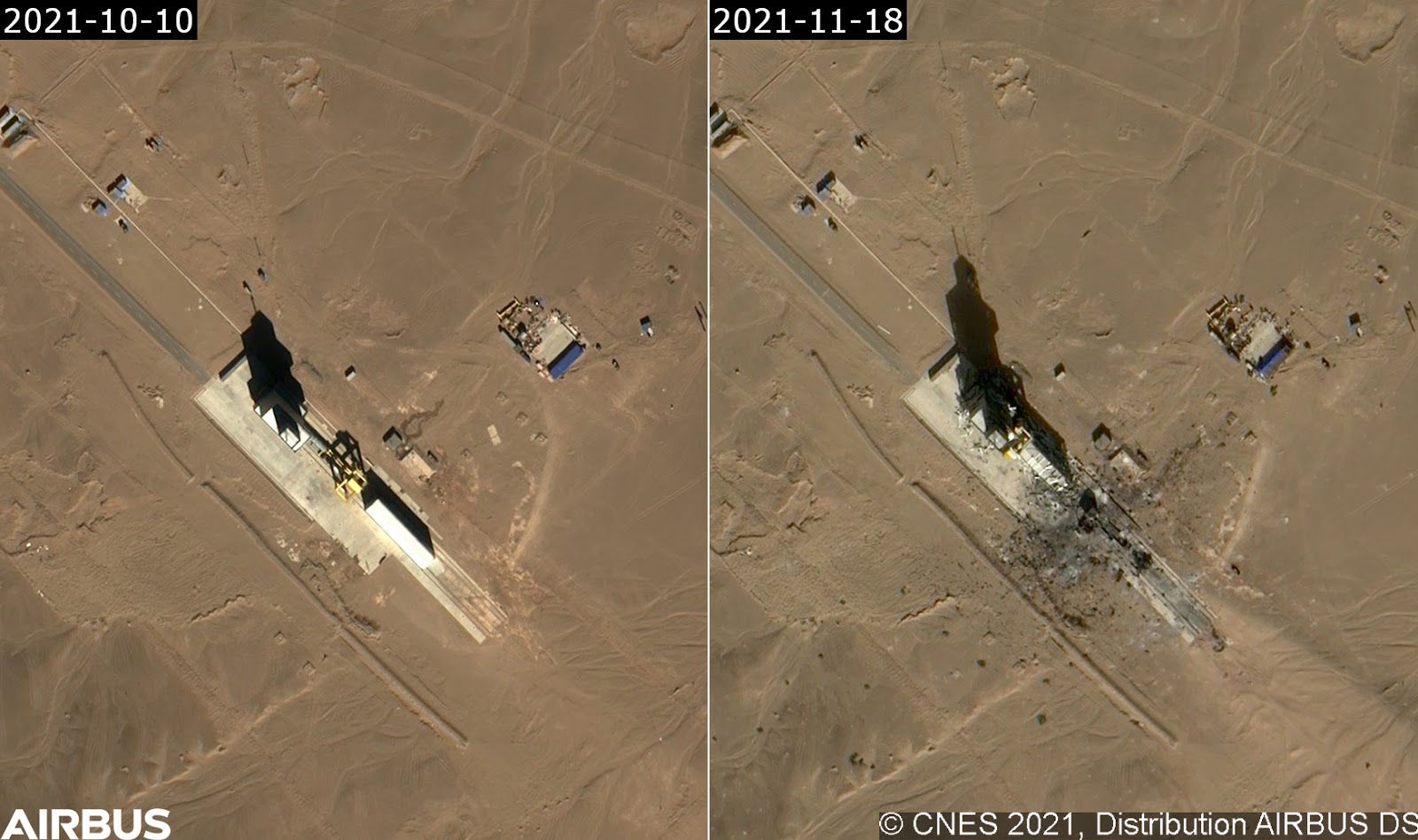 Another excellent example of this is being able to see signs of rocket engine tests taking place. These facilities are often isolated due to the loud and dangerous nature of the testing that occurs, however with satellite imagery we can see evidence of these tests occurring. One great example of this is the Blue Origin’s BE-4 test stand near Van Horn, Texas. We can clearly see evidence of how the engine plume has interacted with the ground. This was later confirmed from their Twitter, showing the engine in action.

This last example is about tracking SpaceX’s fleet with satellite imagery. With the help of people in the space community such as Gav Cornwell, we can track these ships when they are out on missions to recover rocket boosters. If we use Sentinel satellites on Soar.Earth with the info above, we can easily capture these ships whilst at sea. Most of the time, this is just an interesting thing to see as the images don’t really provide any extra information, but in this one particular scenario, it had been noted that something seemed off with the movement of the fleet. Looking into it, I was able to use Sentinel-2 imagery to find the ships, and in the image below we can see one of the support vessels up close to the side of the droneship. This could indicate that something was wrong and they had to transfer crew onto the onboard to check something out. 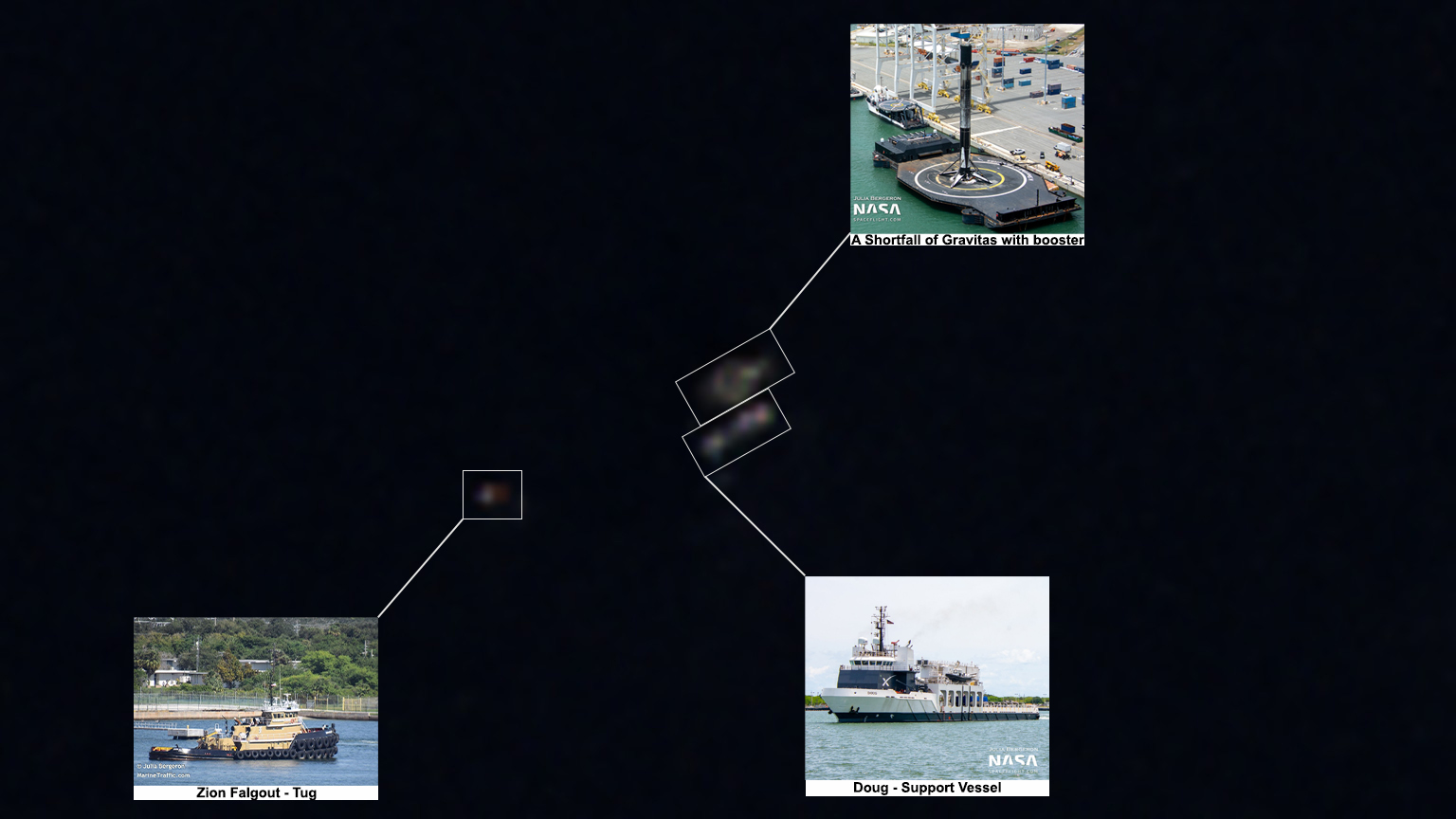 There are so many more examples of how satellite imagery can be used to track the global space industry but I think this covers a wide variety of use cases. As the industry continues to grow we can expect these use cases to grow. Platforms like Soar.Earth are useful pieces of the puzzle in making these kinds of things easily accessible to the public.

What will you find out there?
launch soar.earth Join our Discord community

Harry is a content specialist, mostly focusing on satellite imagery curation, processing, and analysing. In his free time outside of following the space industry he's passionate about landscape and astrophotography.