Part I: Historic Images and Their Usefulness Today

This post summarizes an interview with Soar super-user Sergio Volkmer. After transitioning from geology to architecture, Sergio Volkmer’s interest in satellite imagery was rekindled later in life by community-sourced Open Street Maps. He started processing and sharing rare images and has developed a large following on Twitter for his self-taught techniques. While speaking with SOAR CEO Amir Farhand, Sergio discovered where he could acquire some fascinating imagery to work on. 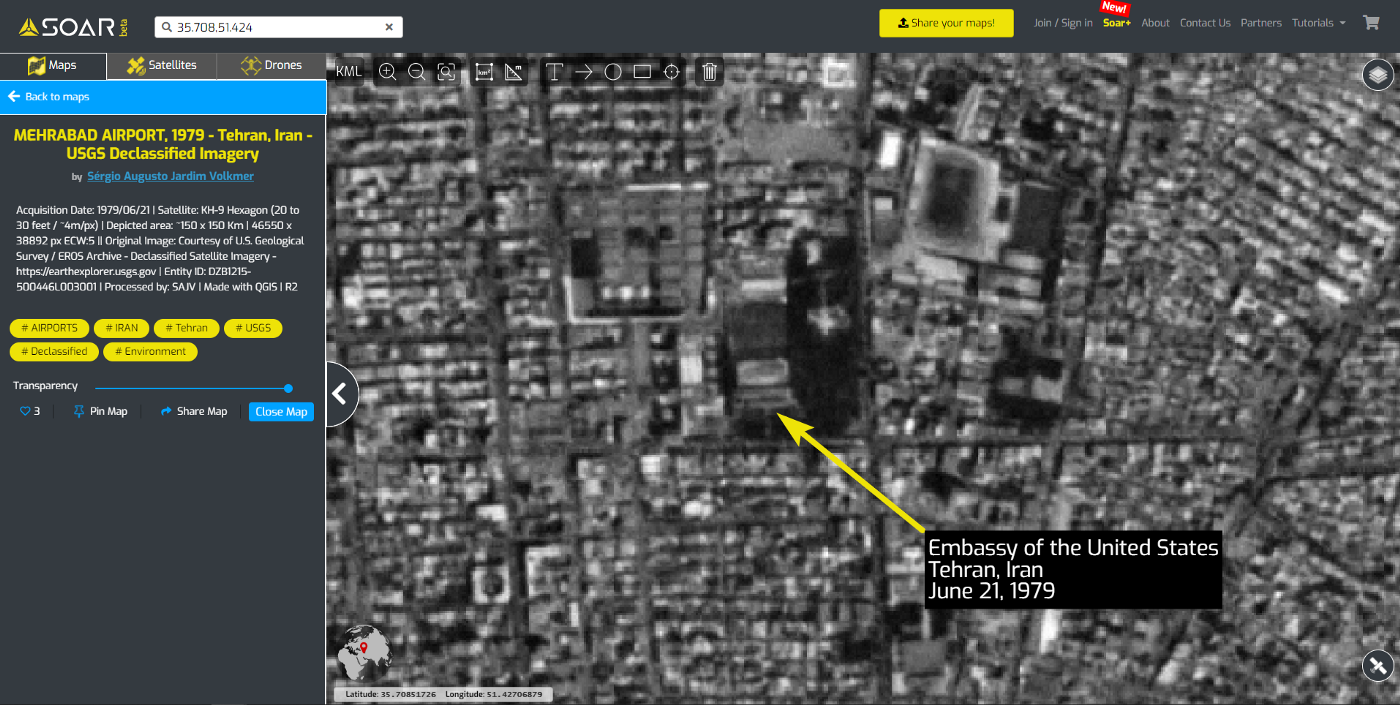 A rich history of once top-secret imagery awaits you on Soar
One Million Historic Images Declassified
The films from these pre-digital era cameras would be ejected back to Earth from the KH (KeyHole) series of reconnaissance satellites by Lockheed Corporation, codenamed Corona, Argon, Lanyard, Gambit, and Hexagon. The capsules were sometimes retrieved from the ground after impact and sometimes they were fished right out of the air by plane. Some contained high-resolution images up to two feet or 60 centimeters (stereographic), while others used lower resolution for global mapping purposes. The high-resolution images in the collection have “greater resolution than any of today’s public open data satellites for Earth observation.”
Memorable Glimpses into History
Sergio tells us he finds every image exciting, but some stand out more than others. An example of one such image is Lake Chad in Africa, still filled with water before 1963 before shrinking in the 80s. This 550x550 km image at low res (~30 m/px) is the equivalent of contemporary Landsat-8 satellite resolution.

Another memorable image for Sergio was the 1967 Port of Tianjin in China, captured in ~3 m/px before its “fabulous” urbanization. Today, it is the world’s 9th busiest port. Sergio also recalls the 1973 Dubai of the United Arab Emirates in ~1.2 m/px, also capture before its urban development.

The Russian Northern Fleet Naval Base in Severomorsk in the Arctic Circle, captured in ~1.7 m/px in 1967, is still undergoing processing. 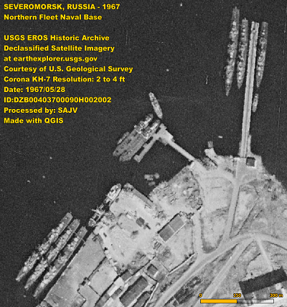 Choosing Locations
The locations depend largely on the desired event or object and its scale. For example, Sergio might look for the oldest available image to assess and demonstrate great regional land changes, like the shrinking of Lake Chad. Sometimes the desired event is on a smaller scale, like a landslide, explosion, or urbanization.

What were these images originally used for?
Most of the images were originally intended for CIA espionage during the Cold War, hence their remaining classified until recently, but some were used for global surveillance and mapping. Today, the images can be used to assess changes in land cover, land use, climate and terrestrial geology, environmental changes, and urban growth. Recent archeological studies have used the images for research and preservation.

They can also offer invaluable support to academic, governmental, and private research related to the era in which the images were captured. Sergio believes the images have “incomparable value”, especially to researchers who deal with temporal resolution.

“The imagery generated are of historical interest and are expected to support current scientific research on climate change and related fields of inquiry.” -USGS

Classified and Declassified
When asked what still-classified areas he would like to see released, Sergio said, “I would like to see the test sites of the greatest nuclear explosions both of the USA and USSR, just before and after.” The areas that have been declassified so far were done so after about 25 years. Sergio hopes more images will be declassified when they’re no longer politically relevant. A recent Tweet of a classified image by Trump reveals “not just that they can provide a really valuable super-resolution 10 cm images, but also that they are still operating.”
Declassified Collections
· The D-1 Collection of 1995 (1960–1972): low-res images of the entire Earth, including land and oceans.
· The D-2 Collection of 2002 (1963–1980): high-res images of all continents except the United States.
· The D-3 Collection of 2011 (1971–1984): high-res images of most of the United States and Antarctica, with sparse coverage elsewhere in the world. 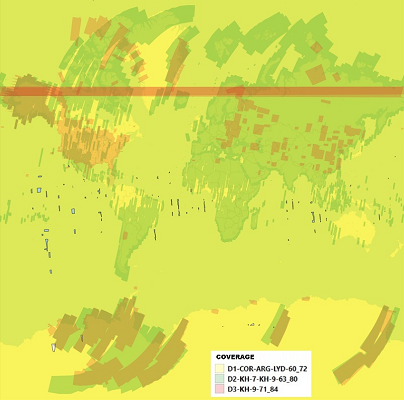