By day, Federico Winer is a professor of political philosophy at the University of Buenos Aires Law School and sidelines as a contractor for a small construction company, but his real passion is photography and visual art. While he loves his three “characters” (art, academy, and hard work), Federico has been leaning more into his artistic side and has shared with us how he uses satellite and aerial imagery in his work.

Like many other enthusiasts and professionals on Soar, Federico has been into maps and geography since he was a child, “unfolding a map onto a table like an archeologist planning his next adventure.” He recalls his first map from the Rome in Michelin Guide of Italy during a trip with his parents in 1979. He delved further into political maps after earning a degree in political sciences and continued using various maps in his world travels before navigation was primarily managed on screen.

Google Earth was a “dream come true” as Federico developed his passion for photography and art. While investigating for a trip to the U.S., he was struck by the geometry of the runways of an airport. He retouched a screenshot of the airport in Lightroom to refine the detail, thus combining his passions and beginning a lifelong career that would lead to exhibitions all over the world and an invitation to contribute to the Google program that had so influenced his art.

When asked about the inception of his fine art project, Ultradistancia, Federico said, “I have a close friend, one of the greatest contemporary artists alive, Miguel Noguera, who had created a strange show called the Ultrashow. Years ago, I invited Miguel to Buenos Aires and produced the Ultrashow. Ultra, from Latin Ultro, means ‘from beyond’. Maybe this is what we do by taking a look at the earth from beyond.”

In less than six months, Ultradistancia and Federico grew from a small fandom in Argentina to a global audience. He was first featured in The Creators Project of Vice Magazine and Intel, which led to articles in The Huffington Post, The Guardian, and Forbes. Shortly after, his art was shown in an exhibition in New York.

Among other questions, Federico gets asked how he takes photos from commercial airplanes and even receives requests for apprenticeship, most memorably from a retired man in Arkansas who Facetimed him from bed during a dinner party.

"Sometimes the level of abstraction… of my work in the maps is so deep that I have people asking me how I take a photo of a microchip."

Federico finds subjects by spending “eternal hours hovering over the globe from [his] screen.” When something catches his eye, he saves it in high resolution until he can immerse himself in it. He tends to prefer aerial when he wants to focus on details but feels a draw to the unique nature of satellite with its glitches and imperfections. “Maybe I’m the only one in this industry who doesn’t complain about that and takes advantage.” He also uses drones for specific, commissioned works.

‍Federico’s latest series on mines is a hit with mining companies, all competing to commission Federico with works on their mines. Perhaps this is because is the first time that art has taken mines as an object and for a wealthy industry is a “must have”. 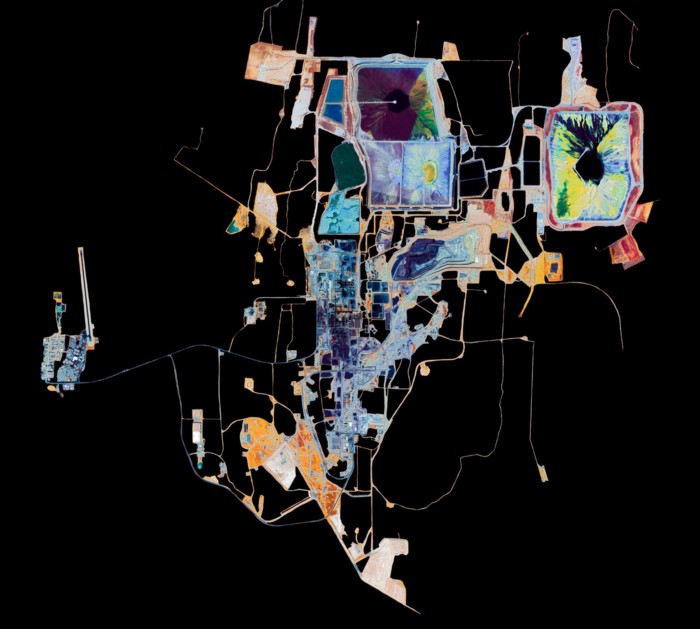 "I express my emotions the moment I create the piece. Maybe I’ve been telling a story with color… or with the patterns in the geography… or with the size or ferocity in the character of the Monster I create out of a mine. If I create maps, the maps I create are to let the viewers get lost in them more than to find their way. Maybe I destroy maps because I like maps." — Federico Winer

Fans and enthusiasts can access Federico’s work, printed from the award-winning world’s “Best Photo Lab” in Germany, directly on his website. He also works with labs around the world for custom projects.