This report contains a summary of qualitative research conducted by Soar using publicly available data from the NASA night time satellite sensors over Ukraine. The collection of imagery processed by Soar compares imagery from before the Russian invasion through to the month of October, 2022.

Image dates are as follows:
‍Image metadata is as follows:
‍‍Special notes:
IMAGE 1 of 5:  29 DECEMBER 2021
‍
‍Before the invasion of Ukraine by Russia, sustained economic activity in the form of night time lights can be seen in the region clearly showing heavily populated cities of Moscow, Minsk and Kyiv. Multiple smaller light clusters of smaller cities and towns across regional Ukraine are clearly visible. 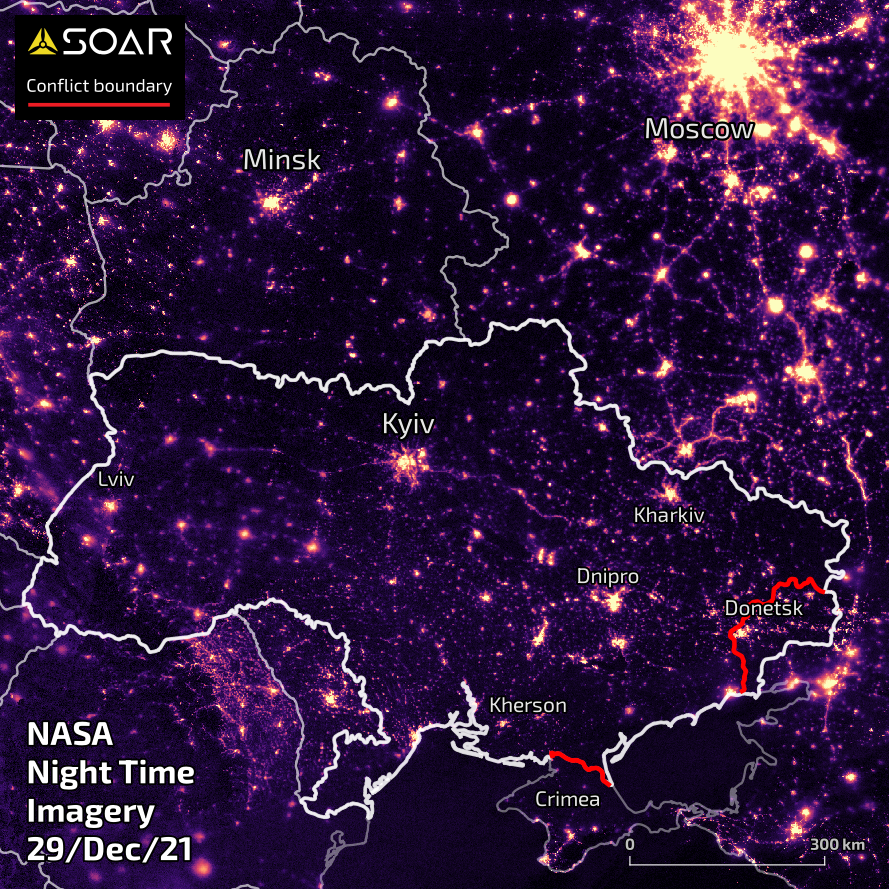 ‍(NB: Purple hues located over Belarus and Russia are due to sporadic cloud cover diffusing light). 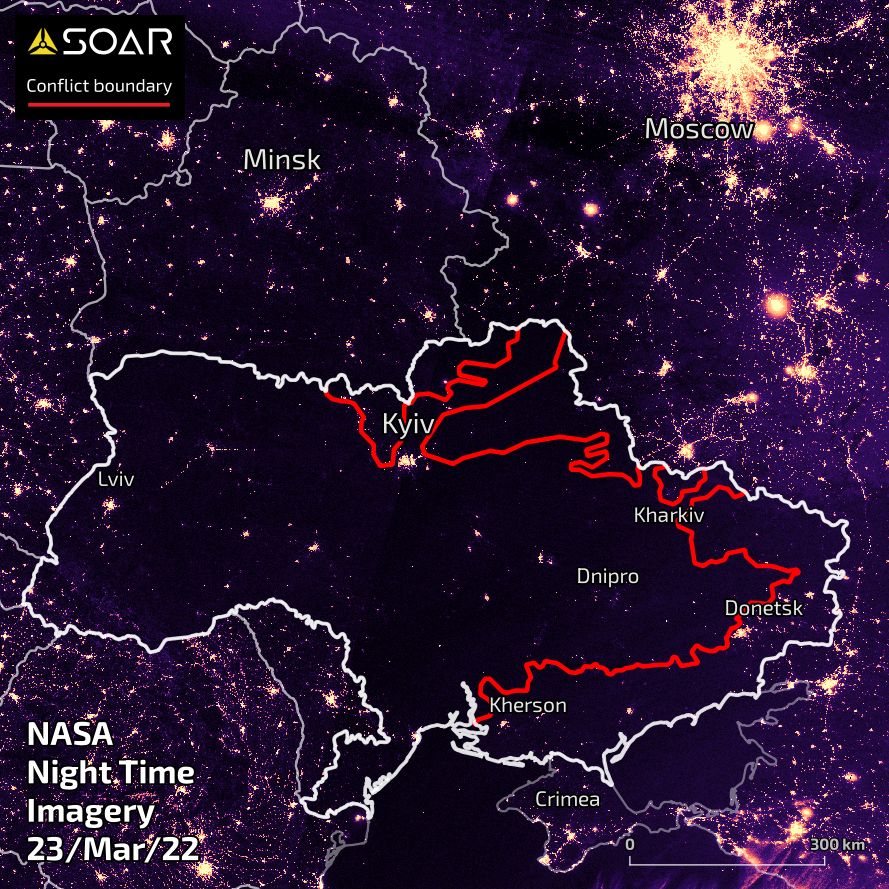 ‍By late September, 2022, the Ukrainian armed forces have successfully repelled the Russian invasion in northern and eastern areas. Significant increase of night time lights around Kyiv is visible. Although most of the newly liberated eastern areas are still dark, central regional areas of Ukraine are seeing a slight increase in night time lights. 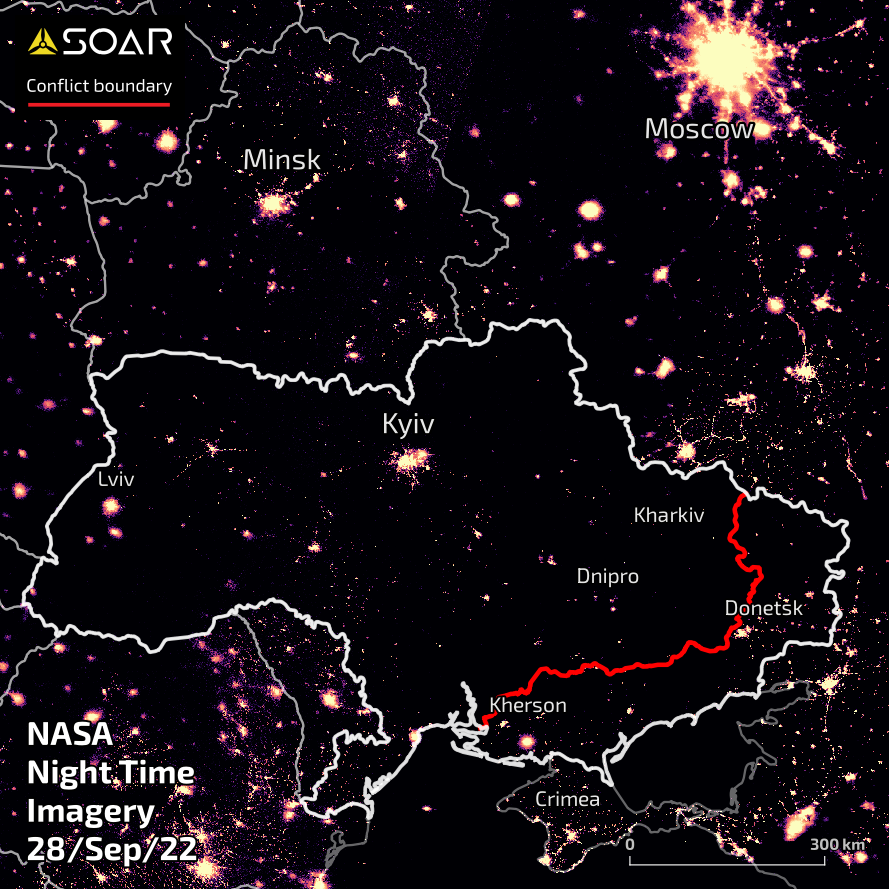 ‍This image was taken a few days before the mandatory nation-wide rolling blackout that was imposed from 20th of October across Ukraine. It shows a scene very similar to the one taken in March 23rd, one month after the conflict started. Although the Russian forces have been pushed back to almost their initial invasion gains in the southeast, there appears to be a lack of significant increase of night time lights across broader Ukraine: likely due to sustained strikes by Russian forces targeting critical electrical and other energy infrastructure establishments.

‍(NB: Purple hues located over Belarus and Russia are due to sporadic cloud cover diffusing light). 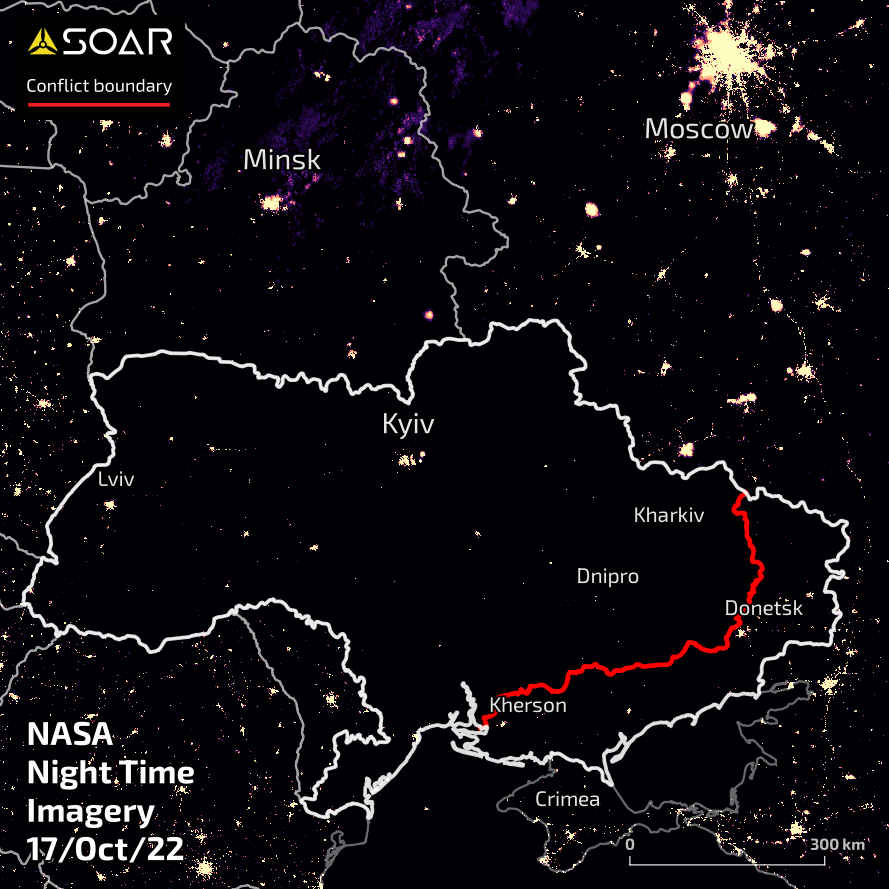 Interestingly, 8 days after the nation-wide mandatory rolling blackouts, there appears to be a slight increase in night time lights, especially in the area around Dnipro in eastern Ukraine. This could be the result of increased energy supply at the precise time of the satellite image being taken or the combination of Ukrainian infrastructure being repaired. 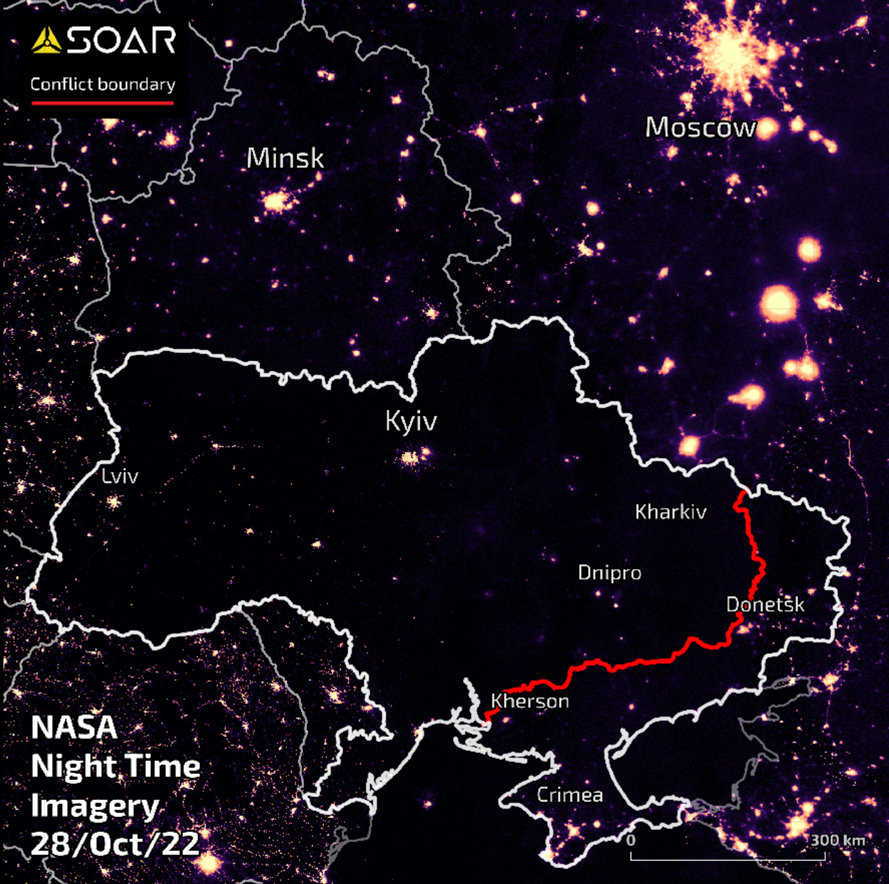 To view more maps around Ukraine, hop on over to Soar.Earth and zoom into Ukraine. We have many amazing mappers who upload new content every day.

Sérgio is a mapping and remote sensing enthusiast, producing content for Soar.Earth. He studied geology and holds a Master of Philosophy, and is now an architect and contributor to OpenStreetMap and OpenData communities. He believes that information and knowledge are first steps towards personal fulfilment that lead to a better world.