How to choose satellite imagery on Soar

Soar provides Landsat, Sentinel, and SkyMap50 imagery
A Snapshot of the Satellites on Soar
Landsat-8. As its name implies, Landsat-8 is the latest in a long line of similar satellites provided by the USGS. Landsat 8 is a broad-spectrum satellite providing satellite imagery across a wide swath of the electromagnetic spectrum (visible and non-visible light)

‍Sentinel-2. Is provided by the European Space Agency and like Landsat is an Earth-Observation satellite, meaning that it too captures a wide spectrum of light (though less than Landsat) useful for monitoring changes in plant health, tree cover, and agriculture across large areas.

‍SkyMap50. Soar’s latest and highest resolution (0.5m/pixel) satellite provides natural colour and infrared imagery for precise identification of man-made features such as buildings and vehicles. SkyMap50 is highly favoured by news agencies and asset managers due to the extremely high resolution and daily whole-Earth coverage.

Soar provides 30m, 10m, & 0.5m resolution satellite imagery
We developed a short series of criteria to help users identify the best satellite imagery for: <insert your objective here!>
What do I need to see? We often think of this as the smallest thing a user wants to see such as vehicles, buildings, beaches, forests, rivers, or major landforms but many features (geospatial talk for ‘things’) are better identified by manipulating the available light to highlight certain features. For example plants emit infrared light that we can’t see. You might be looking at a large green field of wheat but not realise that part of it is very healthy and the rest desperately requires water or fertiliser. In this case you want an image that might show you both the field of interest and an adjoining one so that you can compare the two.

‍Answer: Choose a satellite that lets you see both the smallest features you want to identify and is capable of viewing a large enough area to see how far those features extend.

‍How will I use this image? If you’re using the imagery in geographic information systems (GIS) get the highest resolution possible because there are routines designed to identify and highlight the subtle changes for you. These applications pick out things your eyes wouldn’t see. If you’re using the images in print and media, consider the size of the final product and the resulting image size. In other words, a low resolution image blown up will show the individual pixels and look unnatural. Resolution will also define the size of features you will be able to identify. The standard rule of thumb is a feature (thing) needs to be at least 2x the minimum resolution to be identified. For example a box measuring 3x3m can’t be identified in a 2m resolution image. Even with very high resolution imagery (SkyMap 0.5m resolution), the smallest identifiable feature is a small passenger vehicle. *Identifying the smallest features by sight requires areas of high contrast such as a white car on an asphalt road surface or white boat on water.

With increasing levels of zoom, the advantages become apparent
Do I require new or historical images? The answer will depend on your objective but will also be determined by availability. Satellite constellations (groups of similar satellites) define their global coverage by the swath width of imagery (how many KMs of ground each image measures side to side) and how many satellites are available. Some satellites such as Landsat and Sentinel capture images continuously, while others like SkyMap50 are on-demand and capture images only when scheduled to do so. If you want satellite imagery for a specific day in the future, this is possible with multi-satellite constellations because there’s enough satellites to capture an area every day of the week.
‍
‍Answer: If you require historical imagery, it’s possible to browse the archive of previously captured images to find suitable images. However, if you want to monitor something very dynamic and need to capture daily changes you’ll likely want future collect imagery from a constellation with more than 1 or 2 satellites.

‍What’s my budget? As technology improves, the cost to launch and maintain satellites continually comes down. Similarly, as the ease of access (such as online satellite image resourcing through Soar) has improved, the age of click-and-collect satellite imagery has come upon us. Soar provides free satellite imagery (in a variety of composites such as natural colour, false colour, geology, and Normalised Density Vegetation Index) available from public access imagery resources (USGS and ESA). Because they are low resolution with high spectral bandwidth, these satellites have broad applications and were suited to serve governing bodies responsible for large land areas. Effectively these satellites give the bigger picture by giving users an overview of a large area. High resolution satellites cost more to maintain and effectively need to pay for themselves before their technology becomes commonplace.

‍Answer: If you’re on a budget, select the free options. If you want exclusivity (only people who buy the image can use it) and the opportunity to offer more value to your client or audience choose high resolution SkyMap50 imagery.

Are you counting airports, airplanes, or they types of airplane at a particular airport?
A word on resolution
We spoke of scale and what you are trying to image. Resolution can benefit users both ways, here’s how.Landsat-8 provides the lowest resolution and in turn provides the largest coverage per byte. In plain terms, with low resolution imagery, you can show larger areas of the Earth using less memory. For example you might want to show how river systems surrounding a large body of water are contributing sediments and thus influencing water quality. Landsat imagery is perfect in this example as you are trying to show earth processes over a large area.

Sentinel-2 imagery provides higher resolution imagery, 10m compared to Landsat’s 30m. In the above example, you might first use Landsat imagery for the basin wide analysis and then select Sentinel 2 imagery to show the sediment transported over a large city wide area. Such as the example of the area around Manila.

SkyMap50. At 50cm resolution, small features are identifiable, nearly to the human scale. In this example airport managers could utilise this imagery to implement disaster management in the event of flooding. Many SkyMap50 clients are utilising imagery such as this to perform asset management or to gain competitive intelligence. 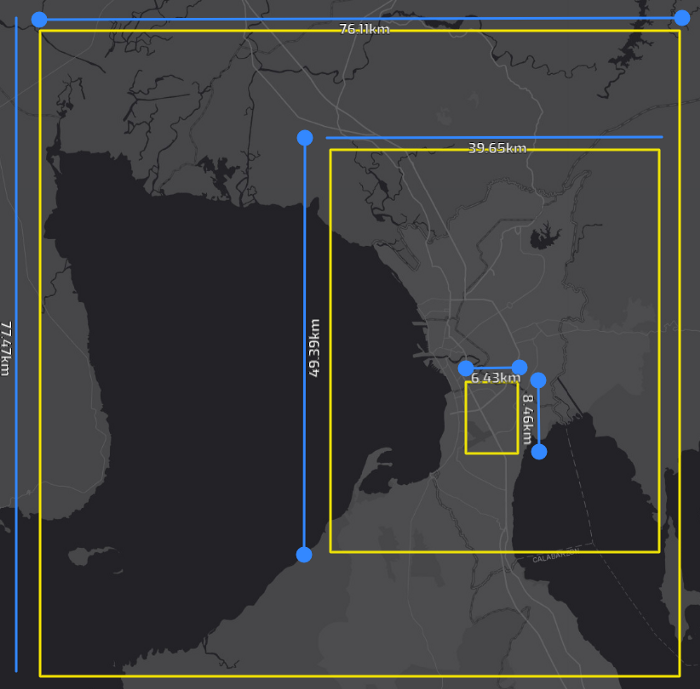