The key to remote earth observation

In 2021, there were around 4,877 satellites orbiting our planet. In the year leading up to 2021, more than 1,600 satellites were launched into space - the highest number of satellites launched in a single year since the beginning of the space age.

Satellites are an essential tool in our everyday life, used in navigation, communications, and earth observation - but this wasn’t always the case. So how did we get here?
The beginning of the space age‍

On the 4th of October, 1957, the world’s first ever artificial satellite, Sputnik-1, was launched into space. It was launched by the Soviet Union, led by Sergei Korolev: an aerospace engineer that worked on long range ballistic missiles.

News of the launch sent shockwaves around the globe, as it was such a significant technological advancement by the Soviets. The Soviets were determined to be the first to launch an artificial satellite into space, but they needed to make some compromises to achieve their goal.

They’d been working on a larger satellite, codenamed ‘Object-D’, since 1956. Its development was taking longer than expected and the Soviets didn’t want to be beaten by the Americans. So they opted for a very simple, small satellite that could be launched quickly and could function for a little while until they got a more substantial satellite into space.

Sputnik-1 is a silver sphere with a diameter of 56cm and four long antennas. While small, it weighed 83kgs, containing a radio transmitter inside. As it orbited around Earth, it was able to pinpoint locations on the Earth’s surface.  It remained functional for 22 days until its batteries ran out and it fell back into Earth’s atmosphere. 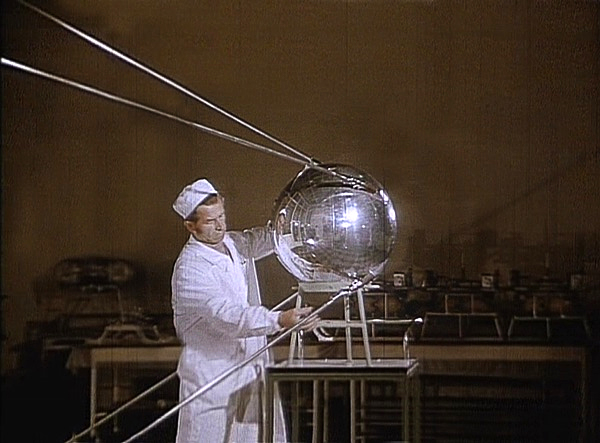 A still image from a film with a replica of Sputnik-1. Image credit: Don Mitchell.
The race is on

Before the Americans could launch their first satellite, the Soviets launched their second, Sputnik-2, on November 3rd 1957. Sputnik-2 was the first spacecraft carrying a living being into space, a female dog, named Laika. Unfortunately, the Soviets were unable to come up with a re-entry strategy before launch, planning to let Laika live until her life support went out. But she didn’t get that far, dying a cruel, tragic death hours into the flight. Sputnik-2 and Laika’s remains later burned up in Earth’s upper atmosphere in April 1958. 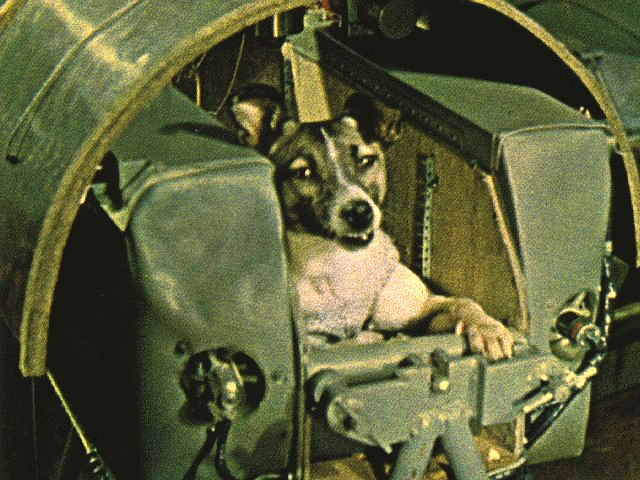 An image of Laika, the dog that was the first living being in orbit, in Sputnik-2. Image credit: NASA 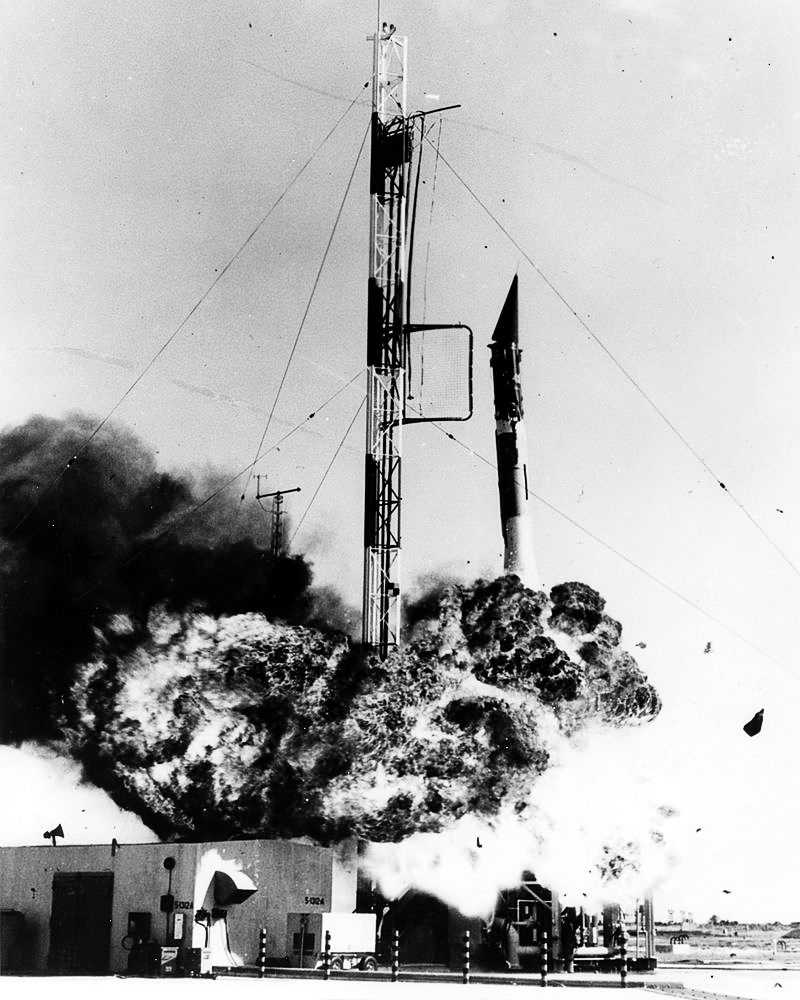 Finally, on January 31st 1958, the Americans successfully launched their very own satellite into space. The spacecraft was the Explorer-1, carried into orbit by the Jupiter C rocket. It was the first satellite to carry scientific instruments, carrying a cosmic ray detector, designed by Dr. James Van Allen, to measure the radiation environment that is found in Earth’s atmosphere.

Whilst Explorer-1 was in orbit, it managed to detect a lower cosmic ray count than expected. This was later theorized and proven to be a radiation belt close to Earth’s atmosphere and was named the Van Allen Belts in his honor. 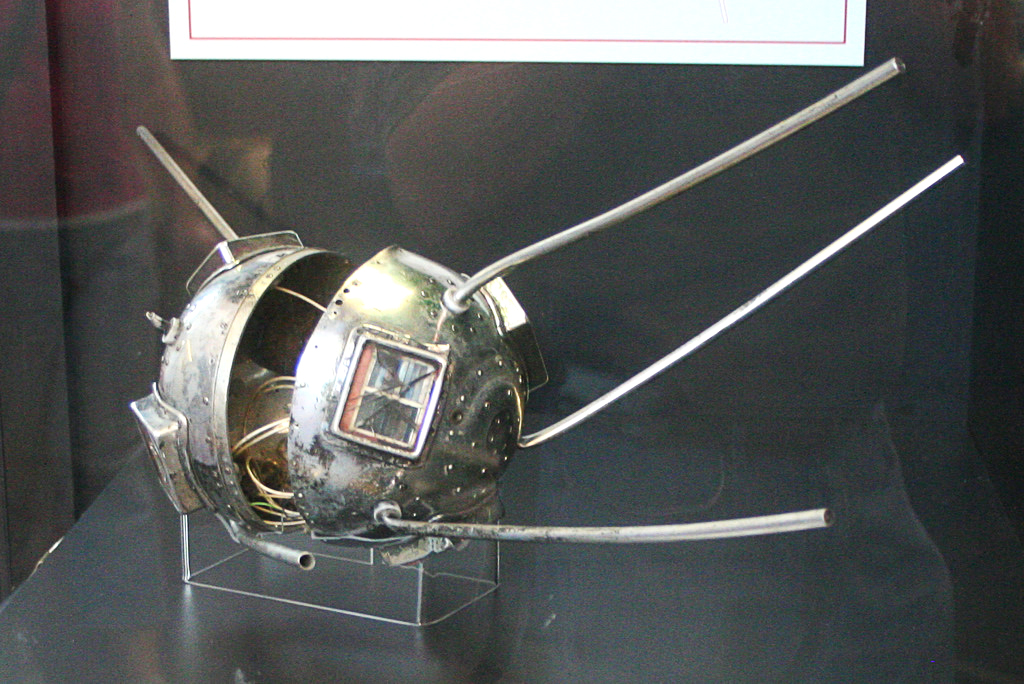 The original Vanguard 1A satellite on display at the National Air and Space Museum, 2009. Image credit: NASA 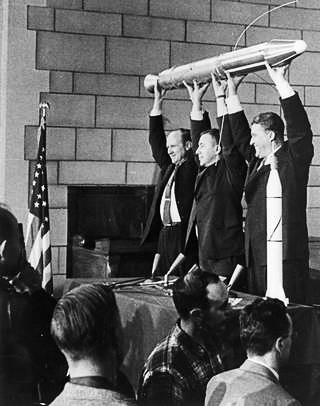 The men responsible for the success of Explorer-1. From the left is Dr. William H. Pickering, Dr. James van Allen and Dr. Wernher von Braun. Image credit: NASA
The pressure mounts
‍
Shortly after the Americans found their footing in the space race, they successfully launched two more satellites a couple of months after the launch of Explorer-1. The first being Vanguard -1, a small satellite designed to test the launch capabilities of the 3-stage launch vehicle that was part of Project Vanguard. The second spacecraft was the Explorer-3, which had an almost identical design to its predecessor, the Explorer-1.

Vanguard-1 was launched on the 17th of March 1958 and was the first spacecraft to have a solar-powered electric power source. It was a small aluminum sphere, about 6 inches in diameter with 6 antennas that were 3 feet long protruding out from it. Its mission was planned for 90 days but transmitted signals until 1964. It was recently predicted that it would remain in its orbit for about 240 years along with the upper stage of its launch vehicle. It remains the oldest human-made object still in orbit.
Explorer 3 was launched on the 26th of March 1958. This was the second successful launch in the Explorer satellite series after the failure of Explorer 2. Its design is identical to its predecessor, except it contained an additional micrometeorite detector and a tape recorder so it could record radiation data. While in orbit, it confirmed the presence of the Van Allen Belts that were previously detected by Explorer-1. The Explorer 3 functioned for 93 days before it decayed in orbit on the 28th of June 1958.

The Soviets launched another satellite in 1958 too. On May 15th 1958, they launched the Sputnik-3: a large research satellite made to explore the upper atmosphere and near space. Sputnik-3 was actually the satellite the Soviets wanted to launch as their first. Previously codenamed “Object-D”, the project had to be delayed as there were some issues with the development of the scientific instruments that were meant to be part of the spacecraft. The satellite’s mission ended on the 6th of April, 1960 after 692 days in orbit and burned up in the atmosphere on re-entry.

At this point, the military both on the American and Soviet sides were responsible for the breakthroughs in the space race. The driving force behind the development of rocket and satellite technology was to further advance communication in the defense force and to develop long range weapons like missiles. Despite the military driving forces, this advanced technology had benefited civilians, such as through the use of satellites for communication. However, intermingling the interests of the military with civil affairs can be understandably complicated.

A few months after the launch of Explorer-1, the National Aeronautics and Space Administration (NASA) was established on 29th of July 1958. The agency serves as an independent body, separate from the U.S. federal government, that is responsible for the civilian space program as well as being in charge of any aeronautics or space research.  They have a very distinct civilian focus and exist to encourage peaceful application of aeronautics and space science. This includes overseeing satellite projects that improve communication for people down on Earth. This ensures that the interests of the military stays separate and prevents bias in space research in the U.S. 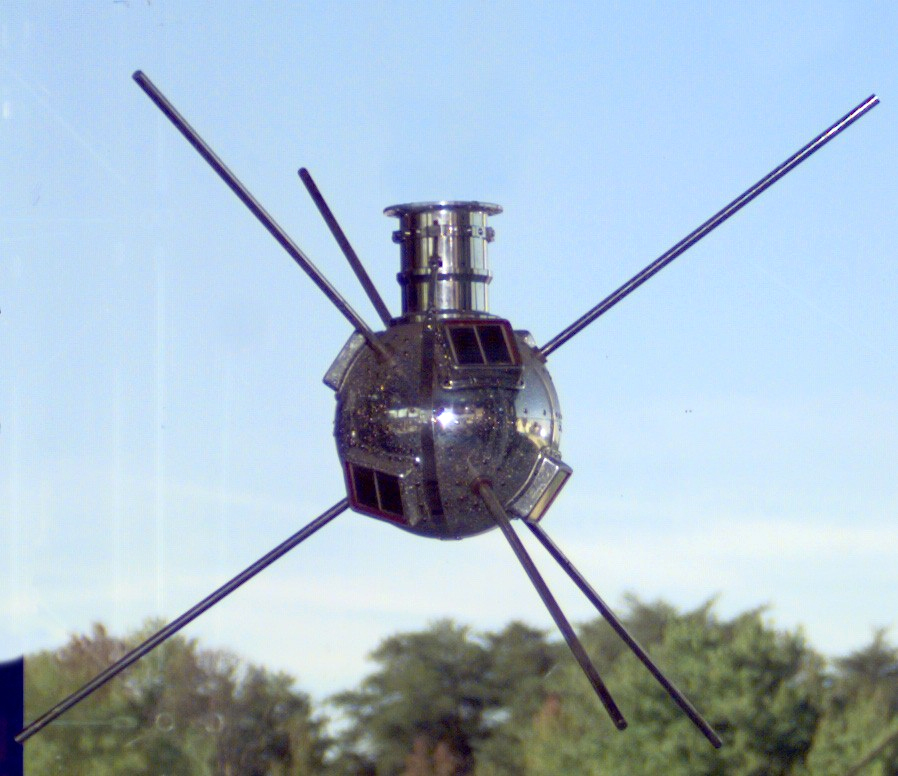 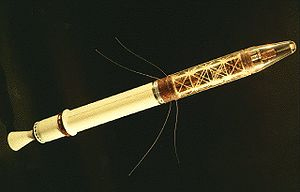 Photographs of Explorer-1 which the design is copied to make Explorer-3. Image credit: NASA. 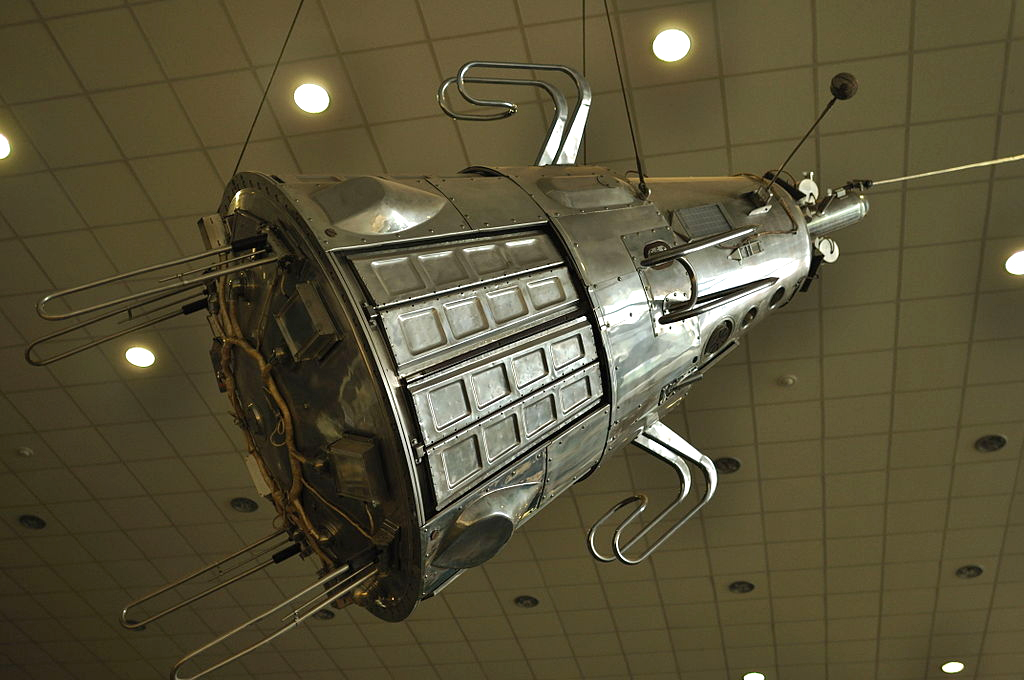 Model of Sputnik-3 on display in the Konstantin E. Tsiolkovsky State Museum of the History of Cosmonautics. Photo credit: Енин Арсений
‍Shooting for the stars

From the successful launches of the first few satellites from America and the Soviet Union, other countries wanted to launch their own satellites as well. By 1980, 23 other countries launched satellites into space, either independently or with assistance from NASA or Soviet spacecrafts since they had prior experience. The satellites had different uses, ranging from studying the environment in space to testing broadcasting and telecommunication.

During this time, commercial satellites funded and established by corporations were also starting to gain traction. The first commercial use of a satellite was the Telstar 1, launched in 1962, which was capable of transmitting live television, telephone, fax and other related signals across the Atlantic Ocean. This later led to the launch of Syncom 3, which aired the 1964 Olympic Games held in Tokyo across televisions in the US. By 1965, the Intelsat 1 communication satellite was launched, giving instant contact between Europe and North America and proved that satellite based communication could be commercialized.

Since then, thousands of satellites have been launched into space, improving the way we communicate, helping us understand our environment on Earth and explore our galaxy. Many of the modern scientific discoveries we know today are thanks to satellite technology. We are more connected than ever before as a society thanks to satellite telecommunications.

On Soar.Earth, you are able to see the labours of this history, by browsing our satellites in action. Check out the extensive archive of imagery from research satellites like Landsat from NASA and Sentinel from the European Space Agency.

Diana is Soar.Earth’s local map aficionado, connecting with people in the field who share the same interest and passion in mapping and cartography. She's a big foodie, so she's always trying out the hottest new food joint or experimenting with new recipes at home.